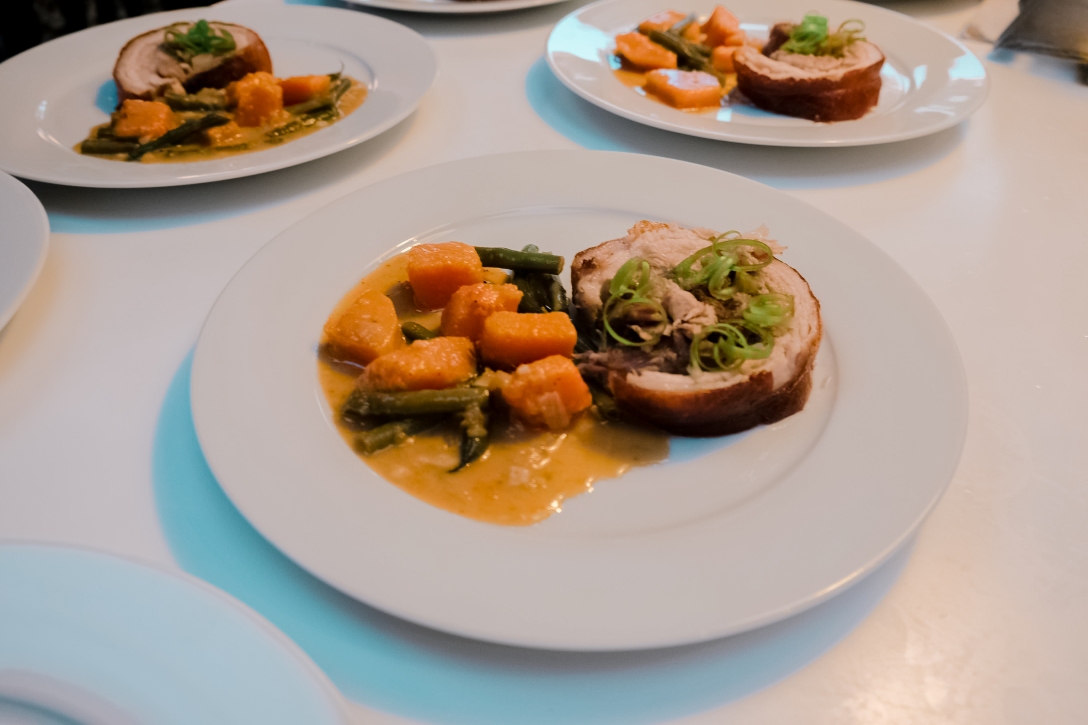 Filipino food has been making waves around the world the past few years. Adobo is no longer the dish nobody recognises and because of the dispersion of so many Filipinos abroad, it was only a matter of time before the rest of the world started appreciating the wonders of sisig and lechon.
UK is home to some 200,000 Filipinos, all of whom are probably pretty homesick for home-cooked Filipino feasts, including me. Although most Filipino dishes are easy to cook at home, they still take a lot of time (my adobo stays on the stove for 2 hours minimum) and if you want a variety of food on the table (because Filipinos can’t have a meal with just one viand on the table), you’ll end up slaving away in your kitchen for hours.
Unlike in New York, there is still a dearth of good Filipino restaurants in London. And somehow, eating Filipino food in a restaurant takes away a large element of how Filipino food is supposed to be enjoyed – casually, at home, with friends and family around a large table. Enter The Adobros.

The Adobros was set up by two “bros” (actual brothers), brought up by a Filipino mom (who we met during dinner!) in Hong Kong, Singapore and the UK. We only met Mark (one half of Adobros) because his brother was traveling and planning his wedding. Mark is a banker by trade and runs Adobros on weekends. During the dinner, his fiancé and mom helped out and we got to chat with them too! 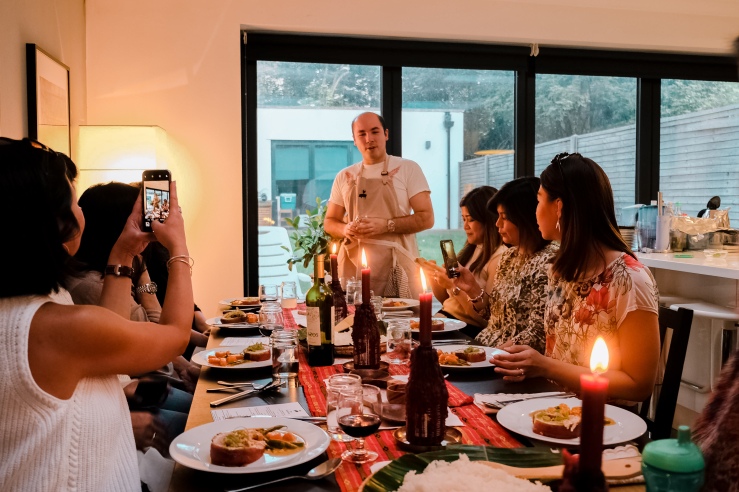 Our dinner was organised by a Filipino friend who invited a bunch of people she knew. Because she was able to pull together a big enough group, we were given a private dinner. The atmosphere was relaxed and very much just a really fun dinner party at someone’s home.
Adobros offer a tasting menu at £34 per head, which I thought was very reasonable for a 3 course meal. The portions were quite generous and by the end of the night, I couldn’t eat another bite. We were also advised to bring our own bottles of wine and beer, which was great.

We arrived at Mark’s house at New Cross at around 6pm. It’s a lovely flat, simply and tastefully decorated with a real homey vibe. Mark’s place had an open plan, so we were able to watch him prepare the dishes while we all chatted around the kitchen and the living area. We were offered cocktails by his mom when we arrived and after some more (lively) chit chat, we all headed to the table, awaiting the amazing feast that was about to come. 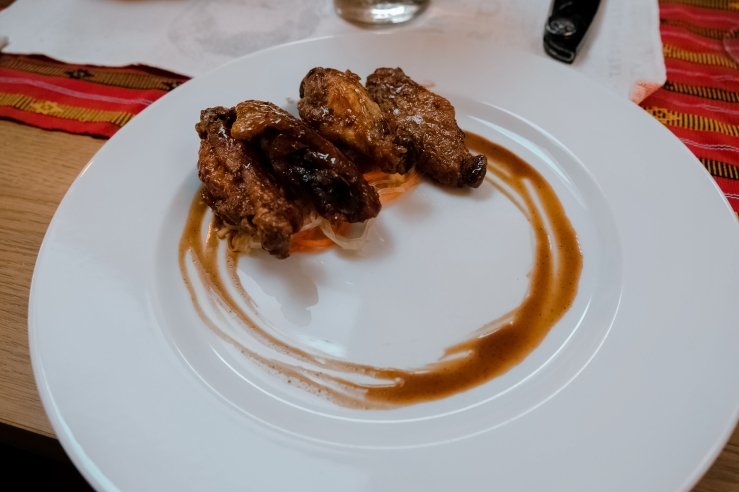 ❤Adobo Chicken Wings
Adobo is a classic Filipino dish of either pork or chicken cooked in soy sauce, vinegar and sugar. The Adobros’ version of crispy fried adobo-flavoured chicken wings was a perfect mix of sweet and salty with a crunchy-chewy exterior that I love in wings. It had a Korean influence to it and reminded me of Bonchon wings – but better!

❤Lechon Porchetta
Lechon is another Filipino dish – usually a whole hog roasted on a spit. The Adobros’ version was pork belly cooked for 48 hours and deep fried until the skin was crispy and the meat was melt-in-your-mouth tender. The flavour was very garlicky and intense, which went with the plain white rice really well (because, really, what’s a roast pork without rice?)
Ginataang sitaw at kalabasa (Beans and squashed cooked in coconut milk)
The lechon was made complete by the beans and squash served with it. The creaminess of the squash and coconut milk and crunchiness of the beans, with the pork and rice – made the perfect spoonful and brought me back straight home to Manila (I could almost feel the hot air from an electric fan while eating lunch during a scorching afternoon).

Calamansi slushie
Calamansi is a Filipino lime that I personally miss so much. There’s nothing like ice-cold calamansi juice on a hot day. Adobros makes it into a slushie that’s a perfect palate cleanser. 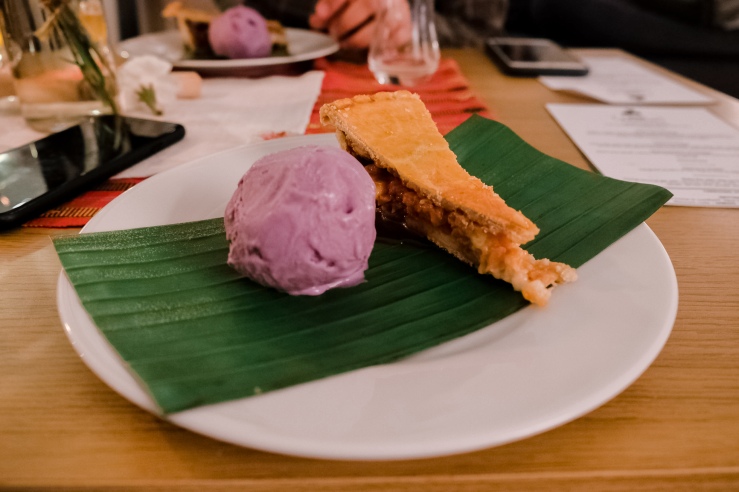 ❤Buko pie with ube ice cream (young coconut pie with purple yam ice cream)
The dessert didn’t disappoint. The fact that it had homemade ube ice cream made it impossible to. The buko tart was made with coconut caramel, which is not typically Filipino but really brought the dish to another creaminess level. It was a perfect ending to an amazing meal.
Although The Adobros put their own little spins on each of the dishes, I like that they didn’t go too crazy with their ideas. Everything still tasted like home, but better. I can’t wait to be back!
Our rating: 5 of 5. If you want a fun night filled with scrumptious, filling food, check out The Adobros. 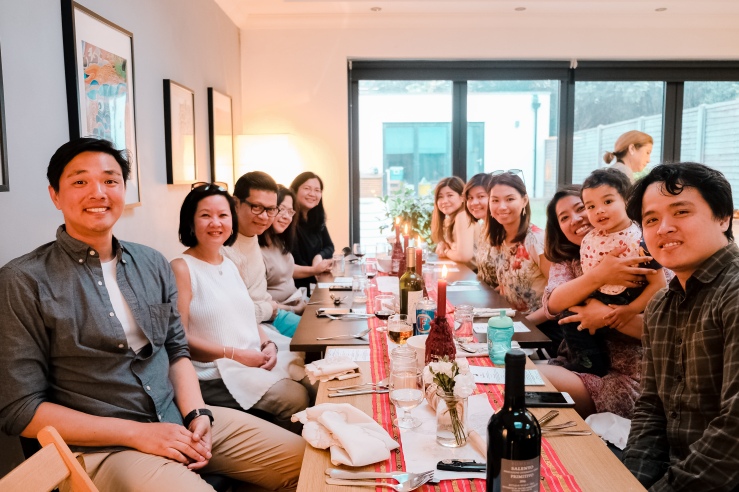 The best in all of London @libertylondon ❤️ I come here for the fabric and wallpaper shop. I don’t sew - I just love looking at all the pretty patterns 😆
The burger of my dreams: duck confit in a brioche bun with crispy duck skin scratchings, red onion chutney, Dijon mustard and rocket @thefrenchieuk
Where every single corner is ❤️
It’s beginning to look a lot like Christmas at Regent Street 🎄
The Royal Academy of Arts was founded through a personal act of King George III on 10 December 1768 with a mission to promote the arts of design in Britain through education and exhibition.
That new new @markethallwestend 🥘 🍴 Highlights: @gopalscorner roti canai and lamb @cookdailylondon vegan pad thai @yatai_uk chicken katsu curry
I rounded up the 8 best dishes we had during our San Sebastián trip. Link in bio 👆🏼
@ramoramen didn’t disappoint. The star of the show was the oxtail kare kare ramen. Other standouts were the sinigang ramen, karaage chicken and miso baked shrimp gyoza. 🍜
Flower-shaped, creamy ice cream? Yes please! Nothing like a cone of @amorinogelato to put a smile on a toddler’s face 😍
%d bloggers like this: